And you thought this day would never happen! I’m of course talking about Lightroom’s GPU support. It allows us to have much more responsive processing, the sliders respond quite instantly to new values.

But wait, there’s more. LR6 also has some new API calls for plugins to use – unfortunately it is yet undocumented. I have however spent this week’s nights mostly reverse engineering the API, and I’m proud to present Knobroom v0.3 which has partial support for new LrDevelopController API, which seems to be a new way of setting develop sliders.

Here’s a little demo of the speed, recorded on a two year old MacBook Pro Retina 13″ using the Intel GPU. Those of you who have Mac Pros might get even faster response?

And how does the new API help? On the video, note how the slider section changes depending on which control I am moving. Also, see at 30 seconds where I am changing exposure and vignette with two hands, which results as a “Multiple Settings” history entry.

I addition to faster response, the API also seems to provide method for accessing different tools, and when the Adobe chooses to document this, I will add more functionality for the plugin.

Slight note: the new API only works in Develop module, meaning that the knobs do nothing if you are in Library mode.

As many of you have noticed, there is automatic build of Knobroom 0.2 available at http://capturemonkey.com/beta

These are on-the-edge versions from source repository, not tested and highly unstable versions. I’m planning to implement a couple of more features before actually releasing a more stable beta.

For issue and feature management, I’ve set up a repository at https://github.com/jarnoh/knobroom/issues If you run into any issues, please submit a ticket there.

Here’s some features from my to-do list for the beta version:

Looks like Thomann has just dropped the price of BCF2000 MIDI controller, it’s now at 125-129 euros (depending on your domestic VAT).

Sean McCormack has created a video of Knobroom used with a Korg nanoKontrol. It has non-motorized slides and knobs, so when adjusting a new picture, you first have to slide to old value, then the slider will start controlling the new value. (I think that is what I saw on the video. That’s how world operated before the motorized faders came affordable 🙂

Thanks for the effort, Sean!

I do have a Akai LPD-8 controller in the closet, I probably should investigate how it works with the current version. Akai has 8 velocity sensitive buttons (think of it as a small drum pad) and 8 rotary knobs.

I’m also working on the 0.2 release, which has been taking a bit longer than I had hoped. One of the excuses is that I’m replacing the control assignment display. It was already a bit slow to initialize, and there will be many more options in the future releases, so it also needs some kind of grouping.

ps. I was fully aware of the double meaning when I named the software – I hope it’s at least very hard to forget the name once you realize it… 🙂

Someone asked what values exactly is The Fader scaling, and what’s not being faded from preset into another.

In short, all the Lightroom’s numeric sliders I could think of are linearly interpolated between the current image settings and the chosen preset, but only if the preset sets new values for that value. This way, you can apply e.g. sharpening preset and still keep your cross-processing look the same.

What is not applied:

All values are interpolated linearly, except RAW white balance, which is (since v0.2) interpolated using 4 linear functions. This combination was figured out by dorfl68, the author of Paddy – thanks!

Outside 0-100% weight, it is still using the same linear interpolation, but as the value can go outside the proper range, clamping function kicks in. Without clamping, Camera RAW would just forget that the value is set at all.

After all the necessary values are interpolated, The Fader creates a “plugin develop preset”, which is then applied on the image. Every time a preset is applied, a new history entry will be visible on the image. Unfortunately, there is no way for me to prevent this, it’s part of the plugin API.

Here is the long list of Camera RAW internal develop settings which the plugin is using. If you notice anything missing, or values that have incorrect values, please get back to me!

First the good news. Adobe Lightroom 3.2 update is out.

Bad news, the update wizard conflicts with Knobroom’s startup, meaning that both update dialog and Knobroom start dialog freeze and you have to kill the Lightroom task to solve it.

Workaround is to temporarily rename Knobroom.lrplugin folder, run the update and then rename directory back.

Sorry for the trouble, I’ll try to figure out a way to start the plugin without interfering with the built-in updater. 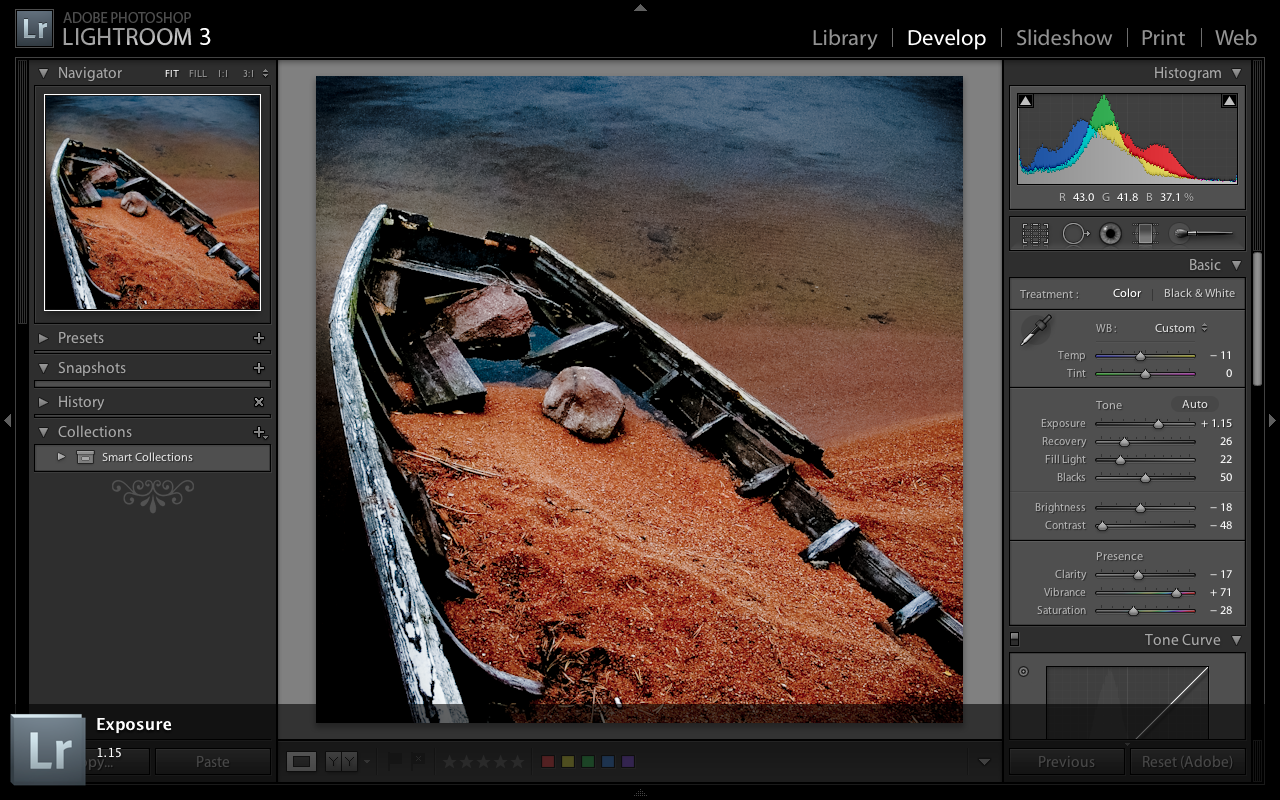 Cat’s out of the bag! http://www.knobroom.com/download

Unzip package to your home directory, giving you with this readme.txt
and Knobroom.lrplugin directory.

Ensure that your MIDI controller is connected, as the installation will
immediately open the device.

Knobroom should immediately start and present you with a device
selection list. Select your MIDI device and the channel it is
listening. The channel is used for reprogramming device settings when
changes are made in Lightroom or the selected photo changes. Knobroom
always listens to all MIDI In channels.

You can assign MIDI CC numbers to Lightroom develop sliders using
File/Plug-In Extras/Knobroom/Assign Controls menu item. Selecting a
preset changes all settings at once, or you can modify each setting
individually.

You can either uninstall from Lightroom’s Plugin Manager, or if you run
into any sort of problems when starting Lightroom, you can just rename
or remove Knobroom.lrplugin directory when Lightroom is not running.

– This is alpha release and it is not yet recommended for production
usage. The version will expire by December 31, 2010.

– MIDI input is shown on every Lightroom start. This is to remind you
that Knobroom is running. MIDI input selection from File / Plugin
Extras does not work properly.

– If MIDI devices are not connected when Knobroom starts, the device
list is not properly updated later on.

– Lightroom plugin spawns a separate server process for handling MIDI
input. The process is connected to Lightroom using TCP socket 56627.
If you are using special firewall software, you might need to open this
port manually or be prompted to accept connections.